In this tutorial we’ll set up the grenadier’s melee attacks (and death).

The grenadier’s melee attacks are a punch and a spin attack – which are both very similar and also very similar to the chomper’s attack. So, we’ll have it easy this time – that’s why we additionally set up the grenadier’s death animation via it’s own schematic.

Open the schematic and change it to our needs.

Duplicate the Wait node and add it at the end (after the 2nd Activate Damage Dealer node).

And that’s it for the schematic. Click on Save Schematic to save it the changes (since we already duplicated it, it’s already a new and saved schematic).

The spin attack is also versy similar to the punch attack, so we’ll continue working on this schematic.

We’ll simply change what we need to for this variation and use Save Schematic As to save it as a new schematic.

We’ll change the used animation type and the normalized times.

And that’s it for the schematic. Click on Save Schematic As … to save it, e.g. as GrenadierSpinAttack.

We can once again base this on the chomper’s death schematic, so open it for editing.

We’ll simply change what we need to for this variation and use Save Schematic As to save it as a new schematic.

We’ll adjust the stored duration’s time to end shortly before the animation ends.

We’ll change to fade an actual color instead of a property (there’s no dissolve effect on the grenadier).

And that’s it for the schematic. Click on Save Schematic As … to save it, e.g. as GrenadierDeath.

We’ve got our schematics, it’s time to set up some abilities – and we can again base them on the chomper’s attack ability.

Navigate to Status > Abilities and copy the Chomper Attack ability.

The ability is not cancelable. Nothing stops the big robot!

We’ll use a range of 4, we’ve already updated the Range 4 battle range template to use raycast line of sight checking.

The damage dealer’s activation tag is already set to attack.

The spin attack is the same as the punch attack, only using a different schematic to animate it and a different activation tag for the damage dealer.

We’ll now set up the battle AI for the grenadier’s melee attacks. Again, we can build upon the chomper’s battle AI.

We’ll use this node to do a chance check on which attack to use. Using the spin attack will have a 35% chance, otherwise we’ll use the punch attack (we’ll set it up as the base attack of the grenadier).

We’ll use the spin attack.

We’ll add the spin attack as an ability and use the punch attack as base attack.

We’ll set up the melee battle AI and override the default death animation.

Click on Add Battle Animation to add a schematic for the death animation.

And that’s it for the grenadier’s melee attacks.

Don’t forget to save your changes by clicking on Save Settings at the bottom of the editor.

Hit play and pay a grenadier a visit. 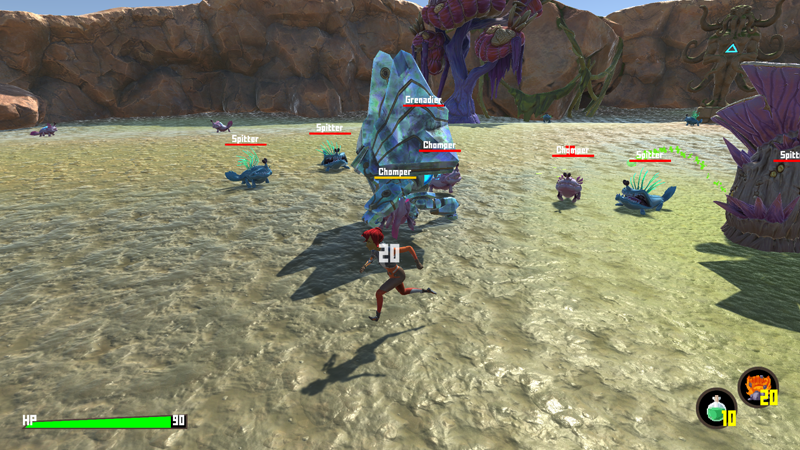 It punches and spins when becoming aggressive, success!

Next, we’ll set the world ablaze with the grenadier’s flamethrower attack!