Set up a UI box prefab for the Unity UI module.

UI boxes are used to show dialogues and menus. When using the Unity UI module, the look, placement and size of the UI box is set up as a prefab.

In this tutorial we’ll create a prefab that’ll be used to create UI boxes. Make sure you already have TextMesh Pro set up in your Unity project.

If you don’t want to use the standard Unity background image and TextMesh Pro font, you can download UI assets here: 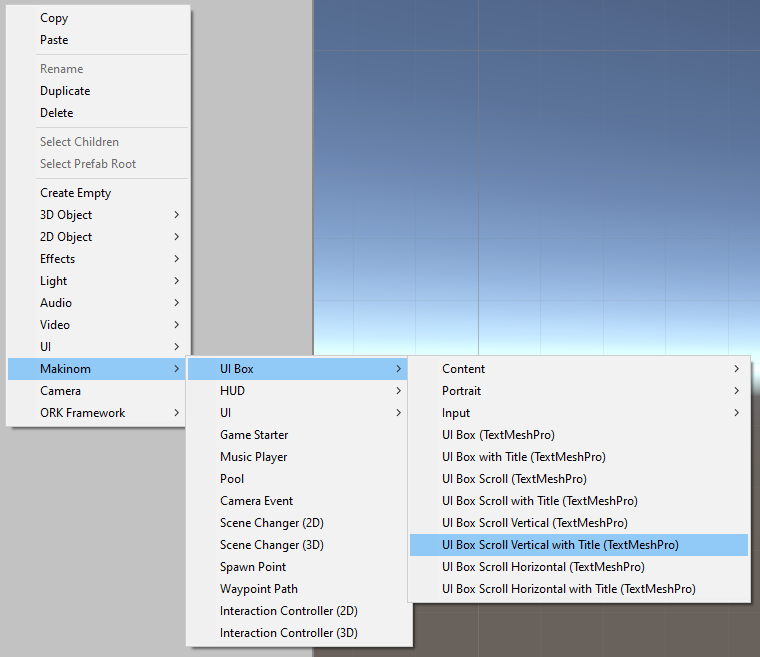 There are different variations available to create (all contain the main text content and use a Vertical Layout Group to arrange the content):

We’ll create a UI Box Scroll Vertical with Title, as that’s the most useful out of all of them. The title box will be hidden when no title is displayed, and the vertical scrollbar is only visible when there is content to scroll.

This will create a UI box setup like this: 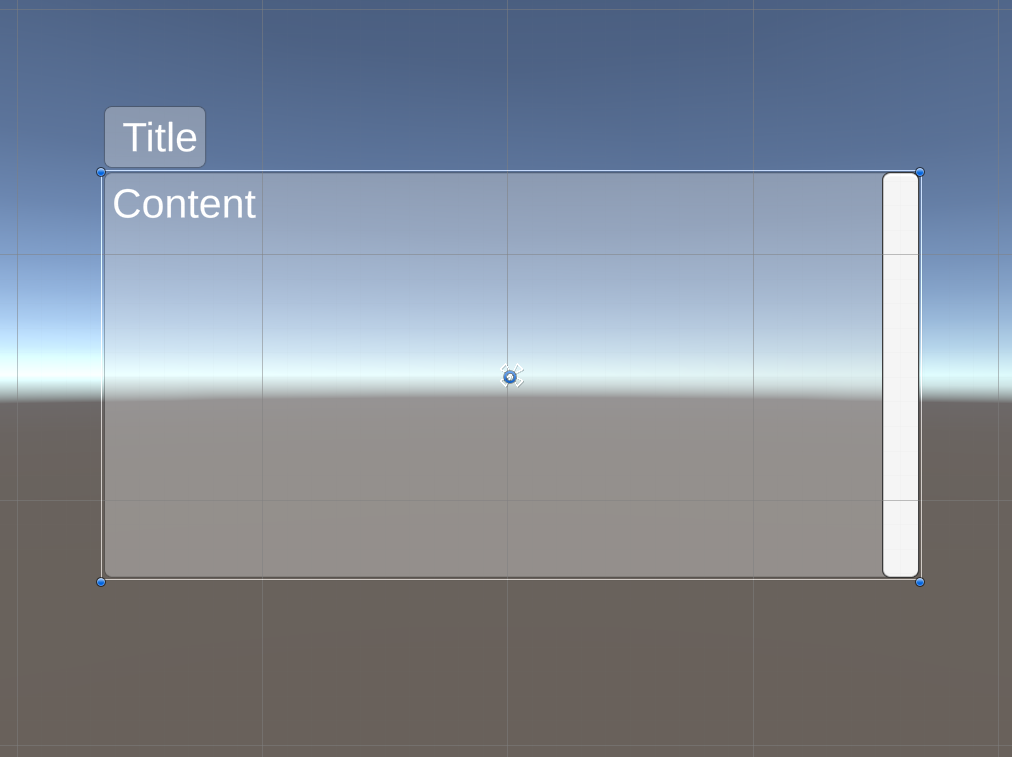 And that’s pretty much all you need – you can already make a prefab out of the UI Box game object (i.e. not the including Canvas) and use it.

When using the UI box in-game, it’ll be placed according to the prefab’s position and size.

So, when creating (or editing) your prefab, move it to the position you want it to be and make it bigger or smaller to match the size you need. Please keep in mind to use a UI Environment scene for editing UI prefabs that matches your project’s Default Screen Size – see the initial setup tutorial for Unity UI module for details.

When dealing with possibly different aspect ratios in your game, make sure to use a correct anchor setup and pivot in the UI box’s Rect Transform component, e.g. anchoring it to the bottom center when the UI box is placed at the bottom center of the screen, using stretch anchor presets, etc. 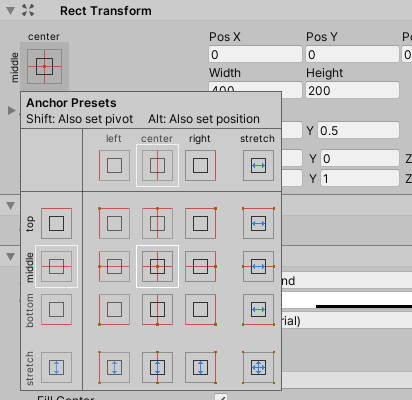 This ensures the UI box will be placed and scaled/stretched with your changing resolution and aspect ratios. This works like for any other UI in Unity (using the Unity UI system), so for more information on that topic, please refer to the Unity documentation. 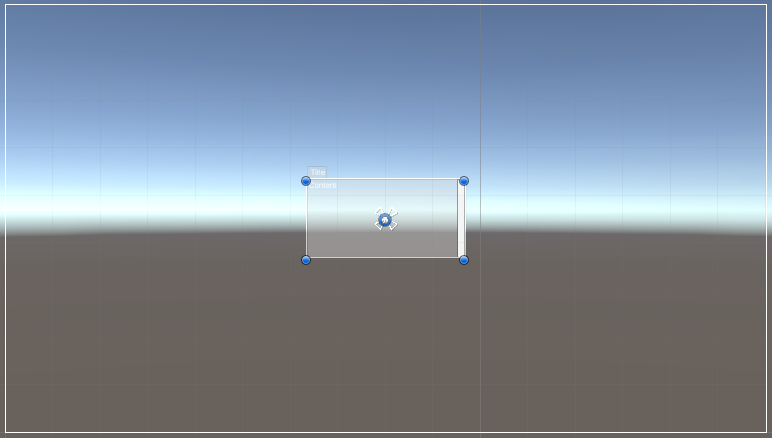 Stretching with height, placed at the left side on screen: 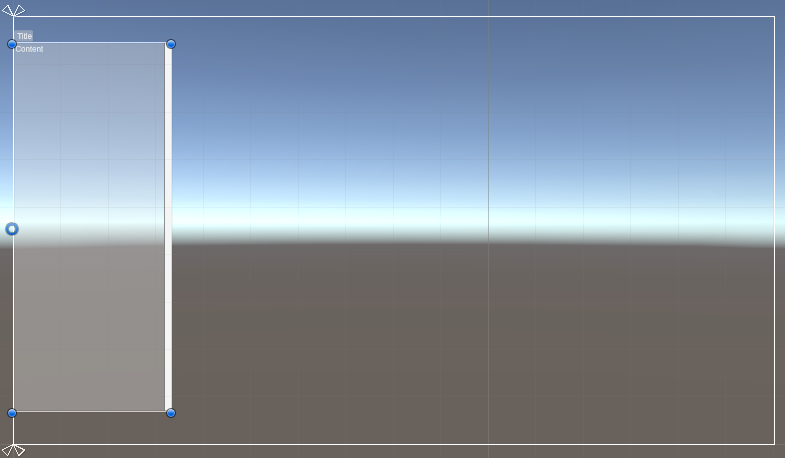 Anchored to the bottom center of the screen: 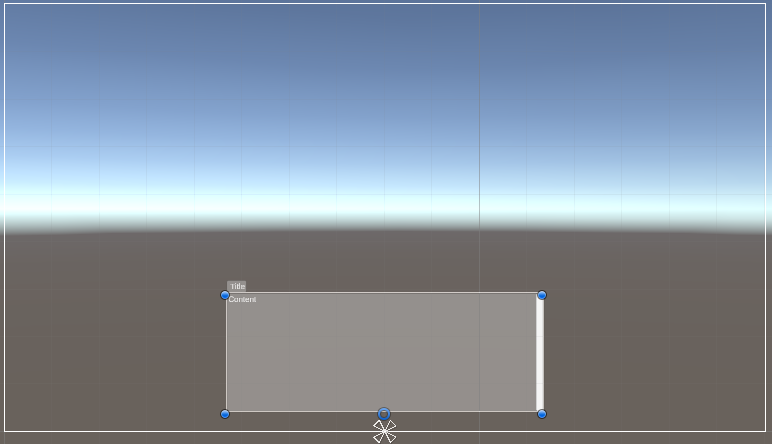 Or stretched with the whole screen: 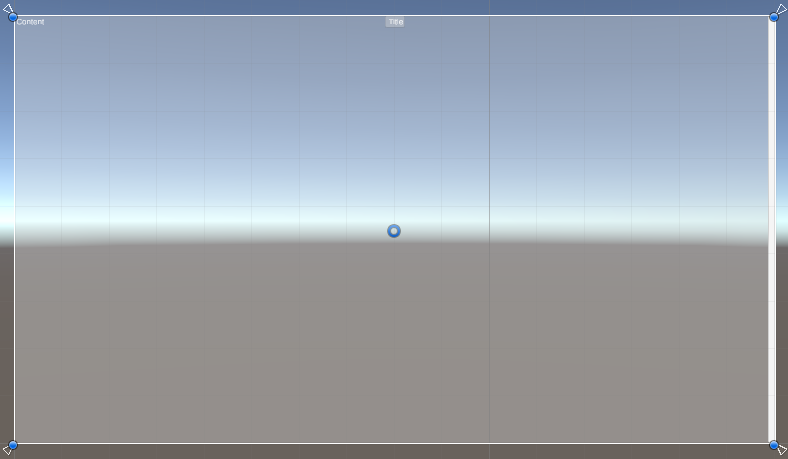 You can also change the position, size, anchoring, etc. of the Title content – for this, just adjust this for the UI Box > Title Content child object.

The UI box prefab you created has to be selected by a UI box.

Navigate to UI > UI Boxes in the Makinom editor, select the UI box you want to use the prefab and change the following setting.

Don’t forget to save your changes using the Save Settings button at the bottom of the editor.

Need another UI box, but at a different position or size?

Just copy the prefab you already created and adjust it to your needs.

Copying a prefab will create another original prefab (or variant of the same parent prefab) that you can adjust without having changes to the original interfere with your copy.

You’ll often use the same UI box, just somewhere else on sceen, so don’t waste your time – make use of Unity’s prefab system, e.g. by creating multiple variants with different placement and size.

If you later want to change the background or used font or font size, you can adjust that in the original prefab and have the others update automatically (unless they override those settings).

However, we’re here to learn, so let’s look into a few more details, styling the box a bit.

You can add ok/cancel buttons to your UI box, they’ll e.g. be used to accept or cancel out of dialogues. This is completely optional, UI boxes can also be used without them, in which case they’re purely controlled via input keys. 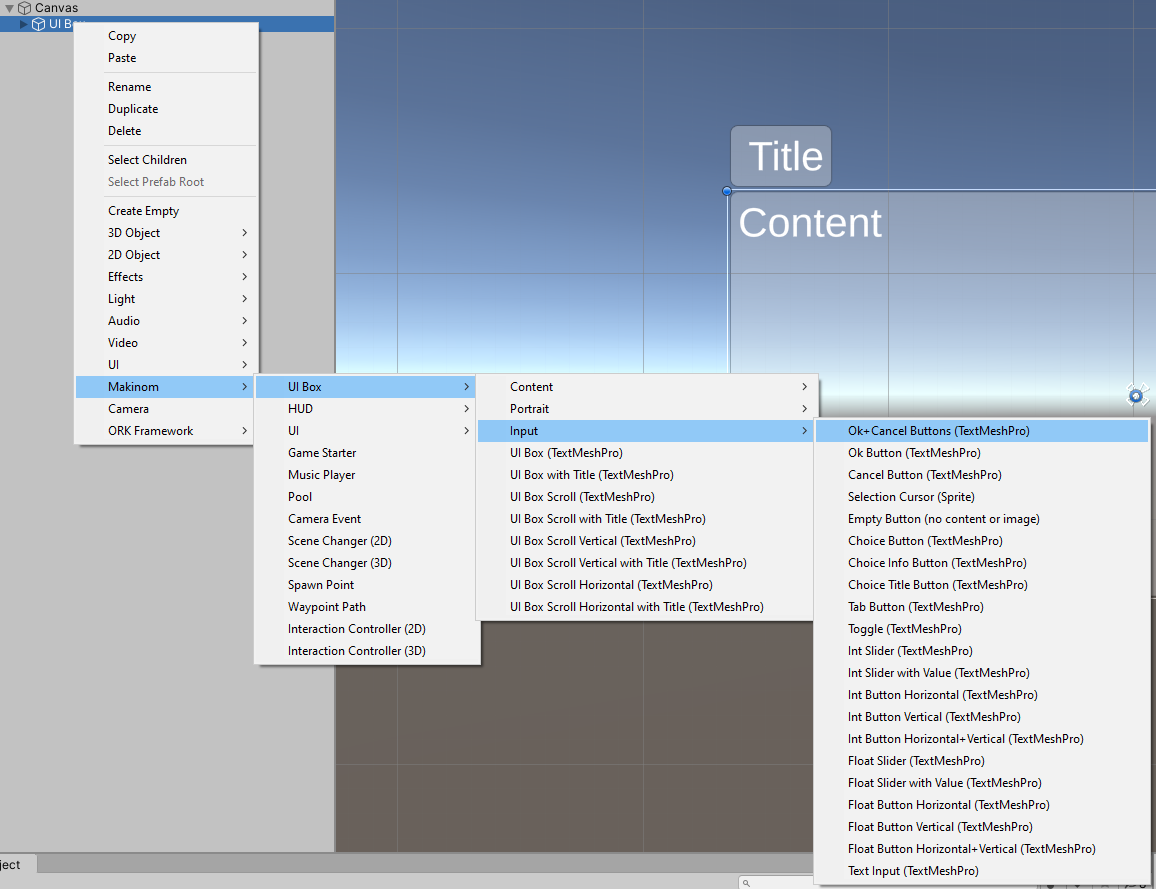 This’ll add those buttons at the bottom of the UI box and set them up in the UI Box component, making them ready to use. In their default setup they’re automatically hidden when the UI box displays multiple inputs (e.g. in a choice dialogue or menu). 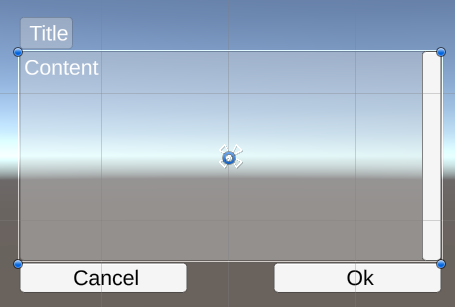 You can now further style or place them as you want them to look.

The content and title box use Image components with Unity’s default background image when created via the context menu.

You can simply change the used image to change the look, e.g. use the BoxBlue or BoxBeige image from the provided UI assets (see above). You’ll usually either use a sliced sprite (Polygon sprite mode with set up borders), or an image that matches the size of the box. 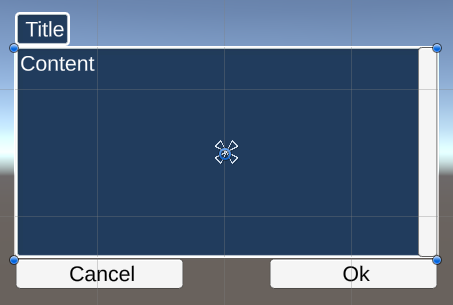 The content box background is handled by the Image component directly on the UI Box game object.

The title box background is handled by the Image component on the UI Box > Title Content game object.

Text is displayed using TextMeshPro – Text (UI) components, i.e. whatever styling you want to use is set up in these components.

E.g. using the font provided by the TMP setup tutorial: 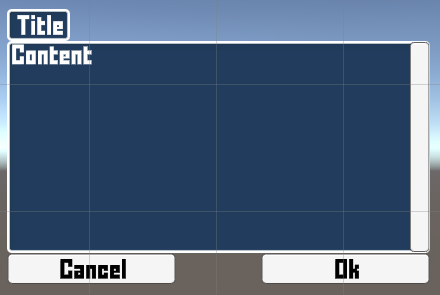 The main content is handled on the UI Box > Viewport > Content > Text game object (when not using scrolling the location will be a bit different).

If you often use the same font, set it up as TextMesh Pro’s Default Font Asset in the TMP Settings asset (should be located in Assets/TextMesh Pro/Resources/).

Most of the layouting is handled by Layout Group components, e.g. the title uses a Horizontal Layout Group to horizontally arrange an (optional) icon and text, while the main content uses a Vertical Layout Group to arrange the text and any inputs that might be added in-game.

If you want to add padding to displayed content, e.g. the main content (text, inputs, etc.), that’s where you’d handle this. 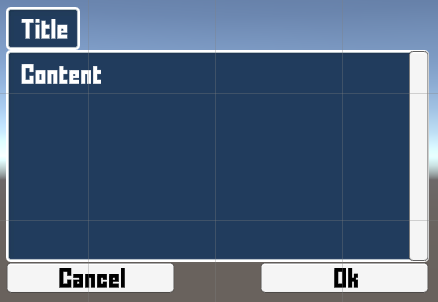 The main content is handled on the UI Box > Viewport > Content game object (when not using scrolling the location will be a bit different).

The ok button is handled on the UI Box > Ok Button game object.

The cancel button is handled on the UI Box > Ok Button game object.

You might also want to adjust the look or placement of the scrollbar.

E.g. make it slimmer and move it a bit inward. You can also change the used images of the different parts of the scrollbar. 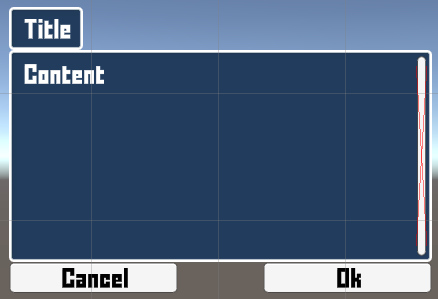 This is handled by the Scrollbar component on the UI Box > Scrollbar Vertical game object.

There are also other optional things you can add to the UI box.

Add portrait content to be able to display a portrait in the UI box, e.g. for a dialogue’s speaker.

There are different variations available:

You can also combine all 3 of them in a single portrait, just add an Image (sprite) or Raw Image (texture) component and reference it in the UI Portrait component that manages the portrait. 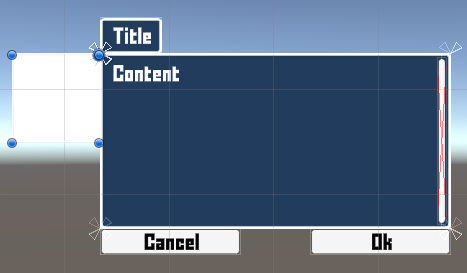 The first added portrait will be used as the main portrait. When addint more portraits, they’ll be added as additional portraits to the UI Box component’s settings.

Add page information to show on which page (for multi-paged text) is currently displayed. 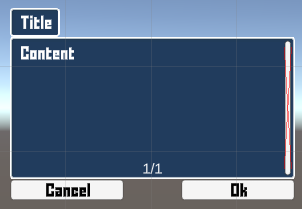 Add a description box to the UI box to automatically display the description content of a selected input. 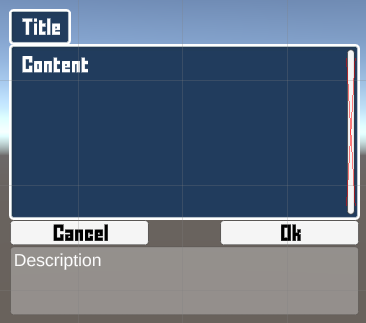 Additional content can be used to display different information in different parts of a UI box, this is available wherever content is displayed, e.g. the main content, title, individual buttons or other inputs. See the UI system overview for more details on additional content.

Bring up the scene hierarchy context menu on the UI Box game object (or wherever the additional content should be placed): Makinom > UI Box > Content > Additional Content 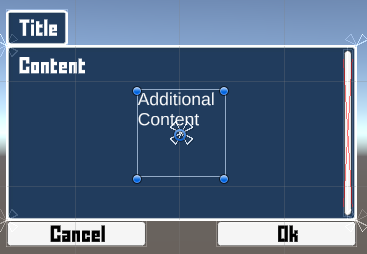 However, unlike all other setups so far, the additional content is not automatically added to the UI Box component setup.

Depending on where you want the additional content to be available, the settings are found at different places. For the main and title content, it’s on the UI Box component, for others (e.g. inputs) it’s usually on their own components.

There are variants with and without horizontal scrolling available.

Additionally, the cursor’s game object can automatically adjust to the width and/or height of the selected input. 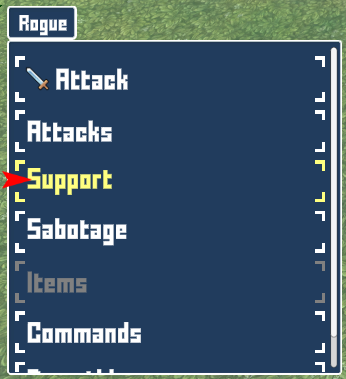 You can use animated selection cursors by having the actual cursor be a child object of the UI Selection Cursor component’s game object.

This allows you to move the cursor icon (or whatever else you use as cursor) without the placement interfering with it. E.g. use it to make the cursor fade a bit to the left and right.

You want the cursor to wrap around the whole selected input? Use the following setup:

In the Rect Transform component (to place the cursor at the center of the selected input):

In the UI Selection Cursor component (to adjust the cursor to the size of the selected input):

You can further adjust the width/height of the cursor via the Additional Width and Additional Height settings.

Also, if you want to select inputs by clicking on them, you should disable the cursor from receiving raycasts in it’s Image component:

Otherwise the cursor image will intercept clicks on the selected input. 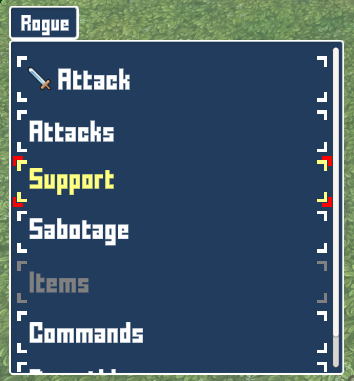 A UI Box component can replace the Default UI Prefabs (defined in UI > UI System in the editor) and use different prefabs to create inputs (buttons, toggles, sliders, etc.).

This is done in the Input Settings of the UI Box component.

For tab buttons, this is done in the Tab Buttons component.

You can also use inputs (and tab buttons) already placed on your UI box prefab instead of creating inputs via prefabs.

Placed inputs are used in the order they’re added here. If the placed input’s type doesn’t match the displayed input, the placed input isn’t used, using a prefab instead – e.g. a placed button can’t be used for a displayed text field input.

You can use UI schematics to animate opening and closing a UI box, e.g. fading it in/out or moving it in/out.

See this schematics tutorial to learn how to do this.