Create a 2D top down RPG with grid battles in this ORK 3 tutorial series.

Phase battles let each faction (e.g. player and enemies) select and perform their actions in their own phase. In combination with battle grids this allows creating very tactical battle systems.

There’ll be no start menu or other menus (beside the battle menu) or focus on the leveling system or other game mechanics. The game starts right in a Town scene, where the player can teleport to a Forest Battle scene by talking to an NPC.

The tutorial uses the Ninja Advanture asset pack by PIXEL ARCHIPEL (assets available under CC0). Huge thanks to them for providing these awesome assets to the world!

The tutorial assets don’t contain the full content of the pack (mainly stripped music to keep it small).

Use the 2D template to create the project, this should provide the project with the needed 2D packages (sprites, tilemaps).

First, after creating the new Unity project, we’ll set up 2 new layers that’ll be used by the tutorial assets. 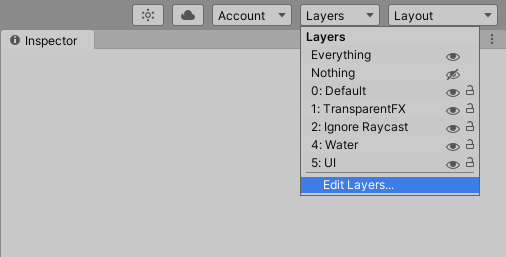 If your project already had layer 10 or 11 set up, you probably started with a project that has something else set up, e.g. by using a different project template. That shouldn’t have an impact on the tutorials in most cases.

The tutorial assets are already set up to use those layers.

It’s generally a good idea to have things on different layers, e.g. for this tutorial, the ground is on the Default layer, while blocking level architecture is on the Blocked layer and the combatants on the Combatants layer. This makes it easy to use raycasting, e.g. for our grid generation to automatically place blocked cells on blocked areas of the scene. 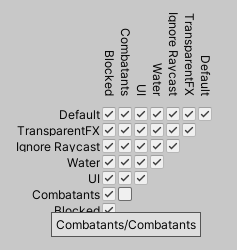 Disable the Combatants/Combatants toggle. This prevents any collision between the layer with itself.

For being able to load scenes in a running game, they have to be added to Unity’s build settings. After importing the tutorial assets, we’ll add the scenes that are included in the package.

And with that, it’s time to start with the setup – we’ll start with setting up our (non-battle) player and some initial 2D related settings.

If you only want to test out the project or compare it with your own setup, you can download the completed tutorial project (up to the last tutorial: 15 Battle Selection Interpolation):