In this tutorial we’ll spawn combatants in our scene and let them hunt the player.

This tutorial continues the sub-series for setting up battles.

With our hunting move AI set up, we’re ready to let enemies spawn in our scene and hunt the player. A battle will start when coming close to the enemy (as set up by the Auto Start Battles settings in Combatants > Combatants > General Settings).

We still use placed Battle components to define where battles take place, as otherwise we might start a battle at a bad spot, e.g. with a tree in the middle of the combatants.

We’ll set up a prefab with the following things:

We’ll also add a Level Zone to the scene, which will manage the levels of our enemies.

Let’s get to it – we’ll add combatants to the World scene (Assets/Scenes/).

The newly created game object will be the basis for our prefab.

This gives us enough room – we can adjust it for individually placed combatants/battles.

Add a Battle component to the empty game object via the component menu in the inspector.

It’s not really needed, but just to make sure.

The battle will not have any start type, as it’ll be started by the spawned combatant getting close to the player.

Add a combatant spawner as a child object of the Move AI Range game object.

A combatant is already added for us, let’s set it up. We can later adjust this for individually placed prefabs.

The combatant spawner is already set up to spawn on Start, i.e. automatically.

With that, our prefab is ready – create a prefab out of the Move AI Range game object, e.g. name it Combatant Spawner Range.

Now, remove the game object from the scene.

Now, we’ll place prefabs in the scene, rotate them to have the battles align nicely and … just keep doing that to have battles where you want them.

Limit yourself to the forest area, i.e. the green area above the river. E.g. I’ve added prefabs here:

Don’t forget to bring a bit of variation into the used combatants/groups.

Now, we’ll add a Level Zone to the scene – it’ll be used by the spawned combatants to set their level.

This’ll create a scene-wide level zone, you can optionally also use a limited zone by adding a collider (used as trigger) to the level zone’s game object.

We want the enemies to be at the player’s level or slightly above.

Hit play (maybe disable the first battle to avoid it) and run to areas where you placed the combatant spawner prefabs. 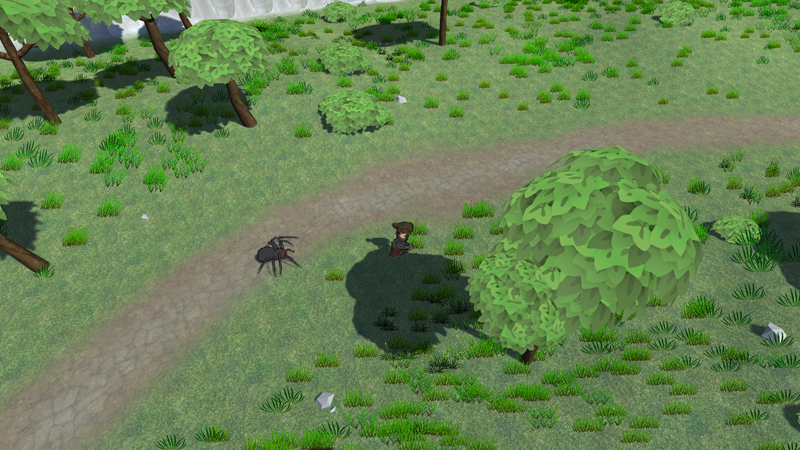 Enemies run around and hunt the player if they see him. If they catch the player, the battle starts.

Next, we’ll set up save games.