The battle AI controls which actions an AI controlled combatant uses in battle.

Battle actions can be: 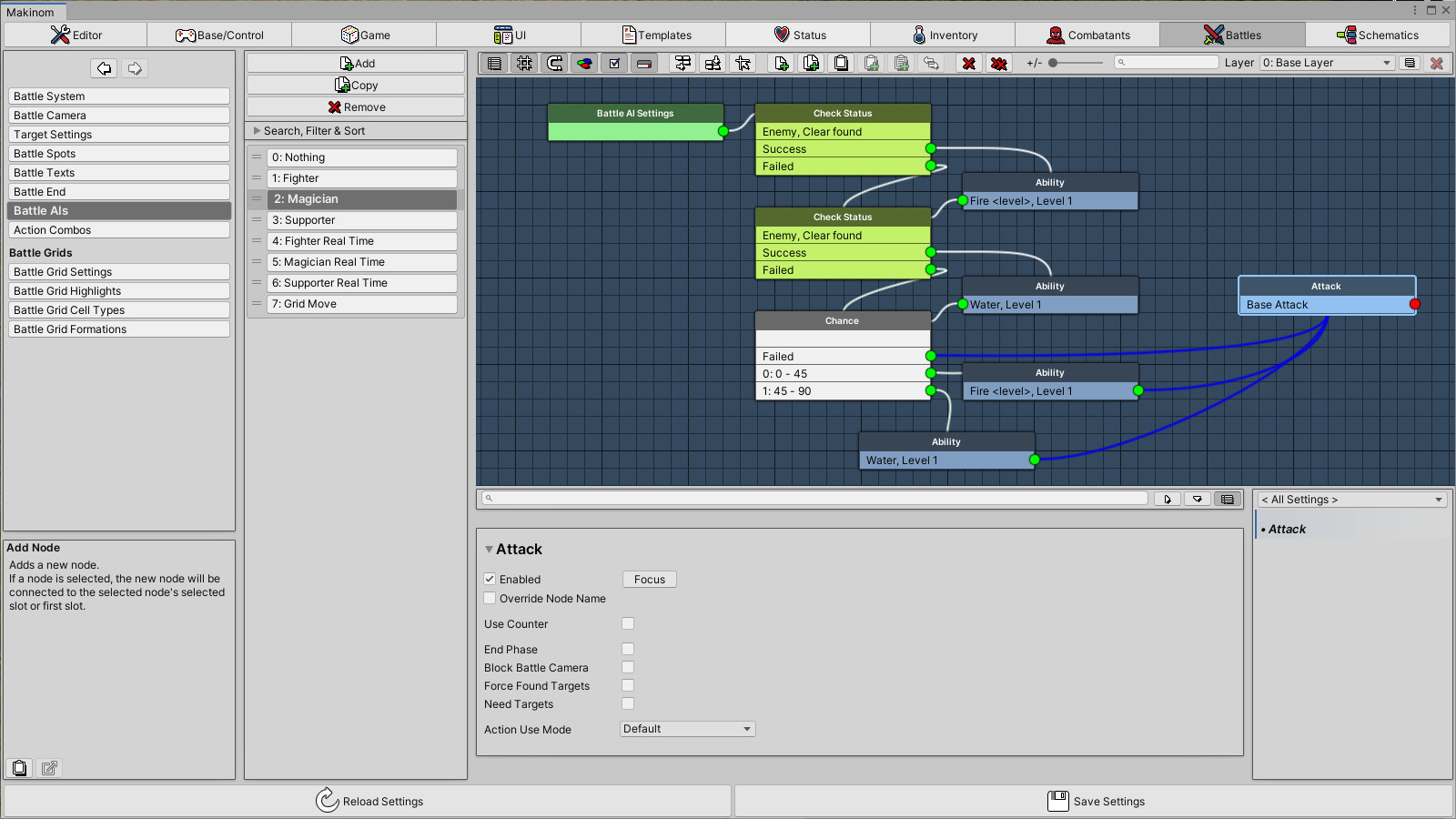 E.g. checking your allies health and using healing items/abilities when it’s low, or abuse an enemy’s weakness to a certain attack modifier by checking the enemy’s modifier value and using an ability to exploit it.

The battle AI can be used in two modes:

The use mode is defined where you select the battle AI to use, e.g. in the combatant’s battle AI setup and equipable AIs (AI behaviours/ruleset).

Additionally, you can define if a battle AI is used at all if actions are already added to the AI action queue at the start of the action selection. I.e. if there are actions queued from a previous turn, the battle AI can either process again (maybe clearing the queue or adding/inserting additional actions), or not process until the action queue is empty.

Using the AI action queue doesn’t mean that a combatant can perform multiple actions in one turn – that’s up to the used battle system and it’s setup.

Action nodes (e.g. Ability or Item) can overrule the use mode.

If none of the combatant’s battle AIs returns an action, the first action in the AI action queue will be used.

If the found targets don’t match the target type of the action (e.g. an ability targets enemies, but the found targets only contain allies), a target will be selected based on the combatant’s AI settings, e.g. using the nearest target or the user itself (e.g. for defend).
In that case, the found targets are ignored and all possible targets (e.g. all enemies) are used for the selection. Also, an ability with a Single target range (i.e. targeting only one combatant) will only use one of the found/available targets.

Check/condition nodes have two important settings to define which combatants will be checked or kept as targets:

There are also options to not use the matching combatants as found targets (e.g. to only check for conditions without selecting as targets) and other settings to manage target selection.

If you want to filter down already found targets without adding new targets to the list, use the following setup:

This’ll check (and remove combatants that don’t match the conditions) the already found targets and not check other, new targets.

You can store and load found targets to reuse them between battle AI executions, or during a battle AI’s execution to switch between different target groups.

Targets can be stored either for the individual combatant, or for the combatant’s group – this is controlled via the Group Target setting in the nodes:

Targets are stored via a target key to identify them, i.e. you can store different target lists.

A Check Status node checks for HP < 50% on the allies of the user. All combatants with less than 50% HP are now stored in the found targets – if any where found, the node’s Success slot is executed next, otherwise the Failed slot.

At least one target was found, an Ability node using a single target healing ability is connected to the Success slot and will use the ability on one of the found targets.

A combatant can have multiple battle AIs – if none of the battle AIs results in an action, the combatant will try performing it’s base attack (or do nothing if that fails).

The default battle AI for all combatants is defined in Combatants > Combatants > General Settings in the Battle Settings > Default Battle AI.

Each combatant can optionally add additional battle AIs or replace the default battle AIs. When using both, the combatant’s battle AI is used first. The individual combatant’s setup is found in their Battle Settings > Battle AI.

The battle AI nodes are divided into different categories.

You can see a list of all available battle AI nodes in this documentation.

Nodes to manage the combatant’s AI action queue, e.g. clearing the queue or checking the count of added actions.

Use actions like attack, an ability or item, defend, escape, etc.

If the action can’t be used (e.g. due to an abilities use costs or because the user’s inventory doesn’t contain the item), the battle AI continues at the next node.

Basic nodes, e.g. using a random next node, a chance check (e.g. 25 % chance), check the game’s difficulty or use another battle AI.

By using another battle AI, you can combine multiple battle AIs – this allows reusing already existing battle AIs in a larger context and create more complex behaviours without getting to crowded.

Contains all check/condition nodes from other categories.

These nodes (also in the other categories) are usually used to select the targets for action nodes (via the found targets).

Nodes to check a combatant’s state, like the current turn or status.

E.g. is an ally’s HP below 25 %, is an enemy’s attack modifier Fire above 100, is a certain status effect applied to the user of the AI.

Nodes to manage the grid formation of the combatant’s group.

Learn more about grid formations in this documentation.

Nodes to check the combatant’s Move AI, e.g. to select the current move AI target or use combatants that are valid hunting targets of the move AI.

You can also change the combatant’s move AI or the move AI’s used mode (e.g. switching it to Hunt mode).

Learn more about the move AI in this documentation.

Nodes to check positional conditions, e.g. distance or orientation of the combatant to a target (e.g. is the user behind the target).

You can also store and load found targets to remember targets between battle AI executions or to switch between different target groups.

Nodes to check and change variables.