Game states link the availability of features to the current state of the game (like showing a menu or fighting).

The game state conditions are used by multiple features across ORK Framework:

A running game can have multiple states at the same time. E.g. the player can be controlled while showing a menu. The following game states exist:

Each game state is set individually. You can choose between these options:

If In Battle isn’t set to No (i.e. either Yes or Ignore), you also need to select the battle type for which the condition is valid.

The following game state condition is valid when the player can be controlled or is in a battle. If you would set In Control and In Battle to Yes, the condition would only be valid while in a battle where you can control the player. 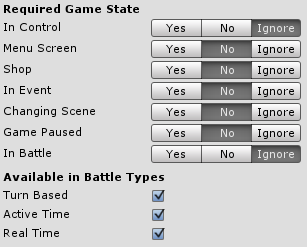 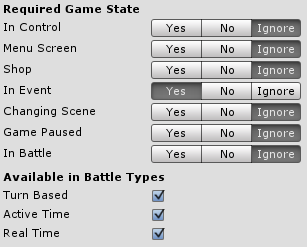 < Create or update a project
Add ORK to your game >