ORK Framework uses a node editor to allow you to create certain parts of your game logic.

The node editor is used to create:

The data you’ll create is called a node tree – it represents a sequence of steps, where each step does something (like adding a value or checking for a condition) and decides which step is executed next. 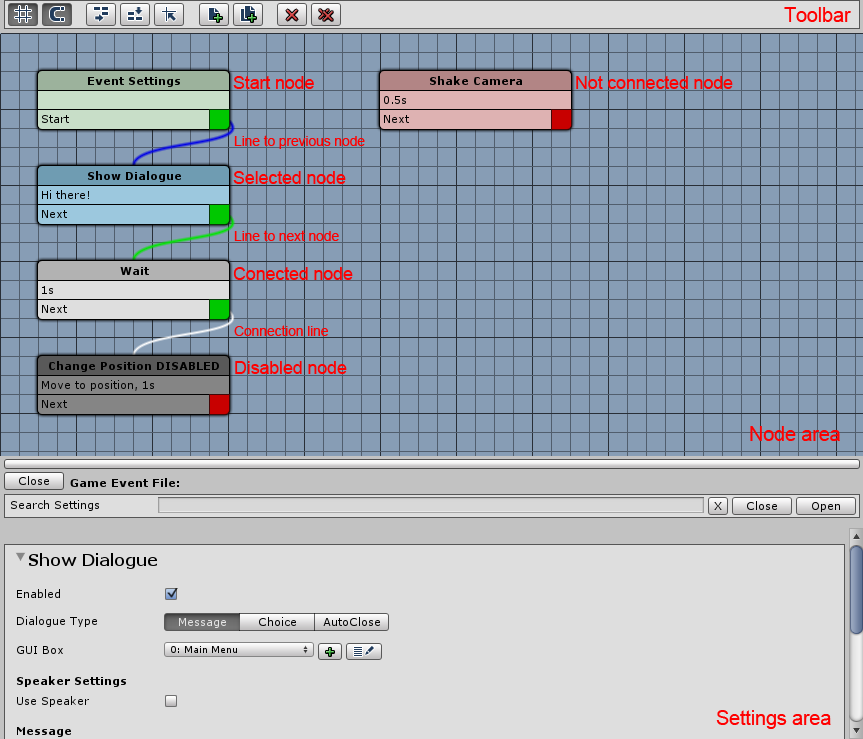 The toolbar allows you to show/hide the grid, toggle snapping nodes and use other functions that are also accessible through the context menu:

The node area is used to control the nodes, you can:

Nodes are selected by clicking on them, to deselect the node, simply click anywhere in the node area (without a node).

Double clicking on the node area will close a limited node view (i.e. displaying only a selected branch of the node tree).

You can use the search bar to search for a specific setting of the node and to close/open all foldouts.

The start node is displayed in green (when not selected). It’s the start for each node tree and can’t be removed.

It holds the main settings of the formula, battle AI or event.

A connected node is displayed in gray (when not selected). It’s connected to the node tree and can (depending on what’s going on in the tree) be executed at some point.

A not connected node is displayed in red (when not selected). It’s not connected to the node tree and wont be executed (but it’s still saved).

A disabled node is displayed in dark gray (when not selected). It can be connected or disconnected from the node tree, but wont be executed either way.

If a disabled node is connected to the node tree, the next node (if connected) will be executed instead. 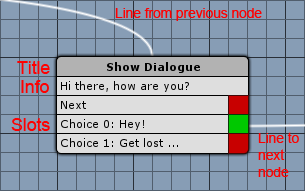 Displays the title (name of type) of a node.

Double clicking on a title will limit the node view to display only this node and all onward nodes (i.e. the next nodes). Double clicking again will close the limited view. This can also be done using the context menu.

Displays some information about a node. Usually a summary of the settings.

The slots are used to connect the nodes and determine which node will be executed next. The name of the slot tells you when it will be used (like ‘Success’ and ‘Failed’ in check nodes).

Most nodes only have one slot available – some offer multiple slots. Which of the slots will be executed next depends on the node. A random node (like in the picture) will randomly select one of it’s slots, while a check node (two slots, comes in many varieties) will select the slot based on some kind of check (like a chance check).

The lines connect the slots to nodes. The line coming from the previous node will connect to the upper center of the node. The lines originate from slots.

The context menu is used to add, remove or sort (automatically arrange) nodes. The available options and what they do depend on where you click.

Open the context menu by doing a right click with the mouse. 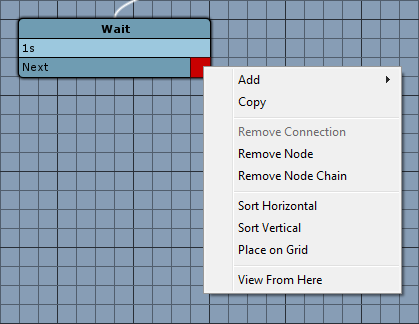 You can also search for nodes: Add > Search …

When called on the node area, the new node wont be connected to any other node.

Only available when called on a node, slot or the node area.

Creates a copy of the node.

Removes the connection from a slot to a node.

Only available when called on a slot.

The node and all following nodes will be removed.

The nodes will automatically arrange horizontally or vertically.

When called on the node area, all nodes will be sorted.

When called on a node, only the nodes that follow this node will be sorted.

All nodes will automatically be placed on the grid.

When called on the node area, all nodes will be placed.

When called on a node, only the nodes that follow this node will be placed.

Limits the node view to display only the selected node and all nodes onward (i.e. the next nodes).

This is only available when calling the context menu on the node’s title.