The 2nd beta version of the grand new grid battles feature for ORK Framework is here.

The Grid Prefabs contain some prefabs that can be used for the grid cell types – please enable Use Prefab Rotation when using these prefabs, since the prefabs already have the correct rotation set up – as well as a basic battle event for the move command.

Battle ranges can optionally define a grid shape to be used in grid battles. This is determined by the Shape Type setting.

No special grid treatment, the range uses the min/max range settings like in non-grid battles.

Uses all cells within a defined range around the origin cell (i.e. the user). The range defines the distance on the grid, not in world space. E.g.:

A range of 1 looks like this in square and hexagonal grids (visualized by using a Mask):

A range of 2 looks like this in square and hexagonal grids (visualized by using a Mask): 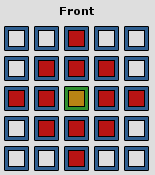 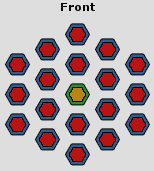 Uses only defind cells around the origin cell (i.e. the user). The cells are selected in a grid mask in the battle range settings.

To create a mask, define the Range and click on the Create Mask button – an empty mask will be created (based on the used grid type set up in Battle System > Battle Grid Settings). You can enable/disable cells by clicking on them. 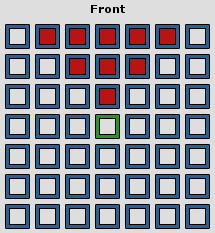 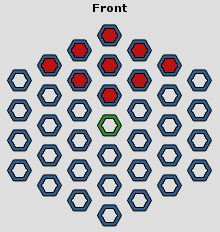 The general settings for battle grids can be found at Battle System > Battle Grid Settings in the ORK Framework editor.

The cell selection is e.g. used when the player selects a cell to move to for the grid move command. Cells can be selected by moving a cursor through horizontal and vertical input keys, or by using mouse/touch input.

The move command handles a combatant’s movement on the battle grid. Beside some pathfinding settings (e.g. if combatants can move over cells blocked by their allies), you can define the default move range and battle events used to animate the move command.

The grid highlighting defines how grid cells will be highlighted during different situations, e.g. when selecting a target cell for a move command.

A cell can be highlighted by spawning a prefab on the cell, and by blinking the cell (and spawned prefab).

These highlights are used during the combatant placement of the player.

These highlights are used when selecting a target cell for a move command.

Highlights the currently selected cell when selecting the orientation.

Highlights the use range of items and abilities. The use range can be highlighted in the action selection (e.g. when selecting an ability in the battle menu) and target selection (i.e. after accepting the ability and while selecting the target).

Highlights the affect range of items and abilities. The affect range can be highlighted in the action selection (e.g. when selecting an ability in the battle menu) and target selection (i.e. after accepting the ability and while selecting the target).

Beside setting up a battle grid in the scene (using a Battle Grid Component), there are some things to consider when using grid battles.

The Battle Grid Component only manages the battle grid, but doesn’t handle starting a battle. This is still done using a Battle component.

If a battle uses a grid (and which) is handled by the Grid Use Type setting in the Battle component:

This step will use the Grid Move command to move to a previously found target (i.e. determined by the battle AI).

This step will check the grid distance (i.e. the cell distance) between the user and targets. Neighbouring cells have a grid distance of 1.

This stepp will change the user’s grid orientation to look at a previously found target (i.e. determined by the battle AI). The battle AI will continue after this step.

Since use ranges in grid battles can depend on which way the combatant is looking (i.e. grid shapes), this can be useful to turn AI combatants toward their targets before trying to use actions.

Depending on which event type you’re using, there are different steps available.

Use a Player Grid Placement step to let the player use the Combatant Placement so place the player group combatants on selected grid cells.

If you want to animate how a combatant follows the path to the target grid cell, you’ll need to do this in the battle event used to animate the grid move command. The downloadable grid prefabs contain an example of how this can be done.

In short, you’ll need at least 3 steps that cycle through the path cells:

This cycle will go through all path cells and move the user along the path until the target cell is reached.

In case you’re using Move Over Allies or Move Over Enemies in the pathfinding settings of the move command, you’ll also have to deal with combatants that stand on those cells, e.g. move them to the side or disable their colliders to move through them. The combatant of a cell can be used through the selected data feature, i.e. use a Select Combatant step to select the combatant from the stored grid cell.

The example battle event provided in the grid prefabs will disable the colliders (and NavMeshAgents) of all combatants on the path at the beginning of the event and enable them at the end.